In Surnadal again, seven months after the last time. Same house, different room. Same view, different angle. Getting ready for the opening of the first exhibition in Billag Festival 2021, a six month programme of events at art centre Surnadal Billag. I am one of two guest curators for the festival. This is a new phase in my prolonged entanglement with the place. Previously I have organised workshops and events, run courses here with students, helped to recruit artists to the residency programme. So it is a kind of home from home. Each time I return between now and the end of September there will be a different group of artists, a different focus, another set of expectations and challenges. Having ended my teaching career almost a year ago, having been, like everyone, a virtual prisoner of Corona for the past year, it is good to have this project.

The whole site has recently been significantly updated. Inactive links have been repaired and more documentation material has been added. The Photo Gallery page has been updated with a selection from a new ongoing image and text project (so far without title) which will be further developed during 2021. The digital print above is from the series ABOT (a box of time) made between December 2020 - March 2021, consisting of 52 prints based on collages. The series forms part of a larger project that will incorporate multi screen audio visual installations and performances later in 2021.

Also online now, Reiterate, Rerun, Repeat, an exposition in VIS, the Nordic journal of artistic research, by Michael Francis Duch and myself.  The exposition consists of an email conversation illustrated by excerpts from some of our joint projects, including the ongoing audio visual work "Accumulator". See videos for Accumulator 1 / Accumulator 3 / Accumulator 4

Reiterate, rerun, repeat is an exposition by Michael Francis Duch and Jeremy Welsh, published in edition 7 of the Nordic Artistic Research Journal VIS. (Norwegian/Swedish and English.

ABOT (a box of time)

ABOT (a box of time) is an ongoing project started in late 2020. The first phase of the project, which will later be developed into installations and audio visual performances, consists of a series of 52 digital prints, based on collages. As prints, the images are produced in Super A3 format on archival matte paper. In digital format they can be presented as a slide show and incorporated into video projections.

Some of the images in the series are considered to be visual scores that can be interpreted through sound, and as audio visual events. Those featured here are intended as stand-alone images, either in print form, on screens, or projected.

Collage has been a format that is suited to the reduced circumstances of working under COVID restrictions. Converting the collages to digital format increases the potential for distribution and exhibition through a variety of channels, online and offline. It is planned to exhibit them as prints in connection with a video and sound installation, when possibilities to do so become accessible again.

The full set of images can be seen here 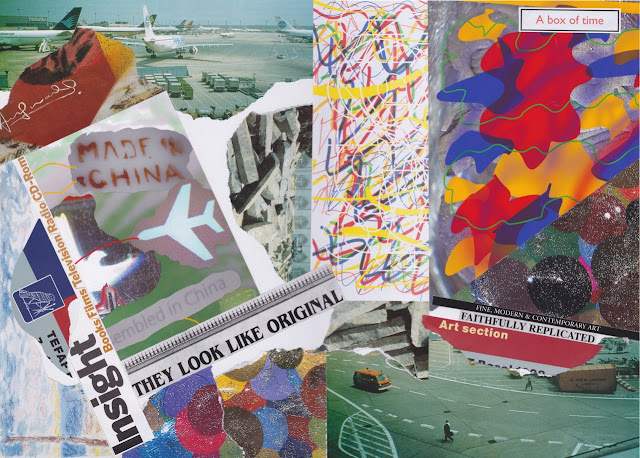 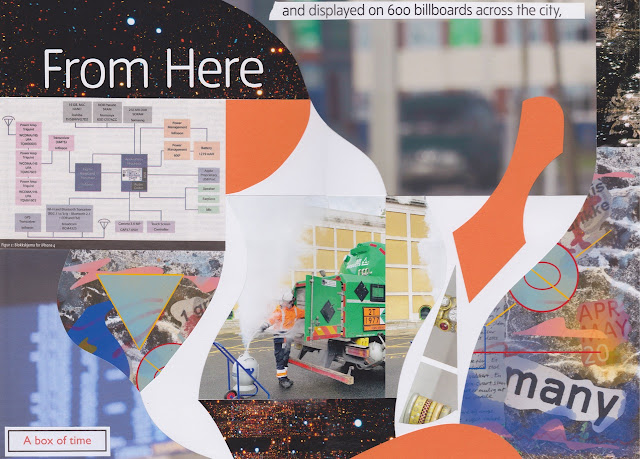 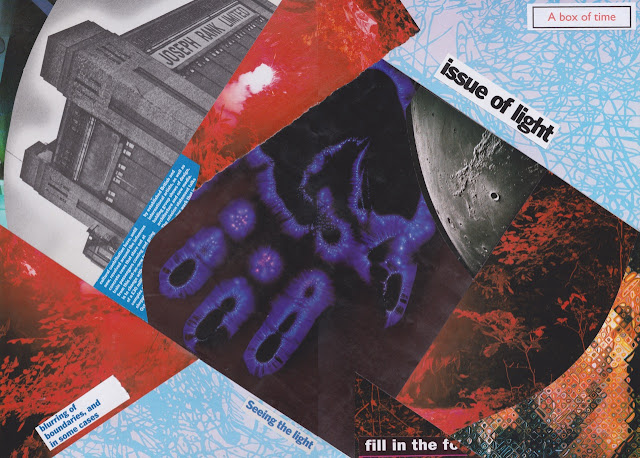 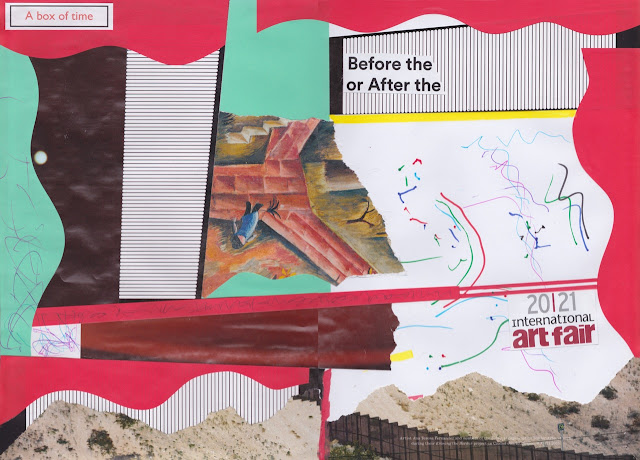 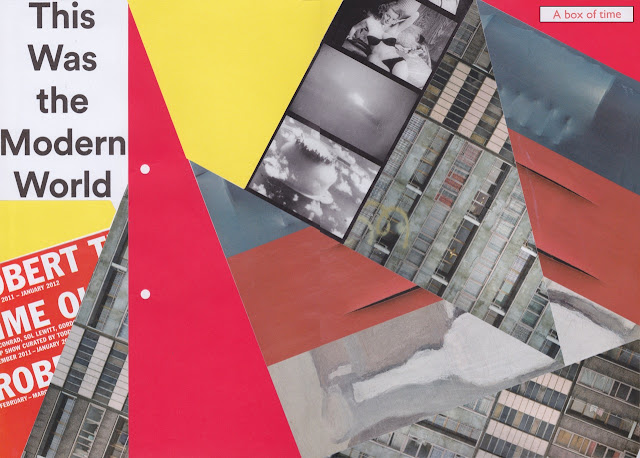 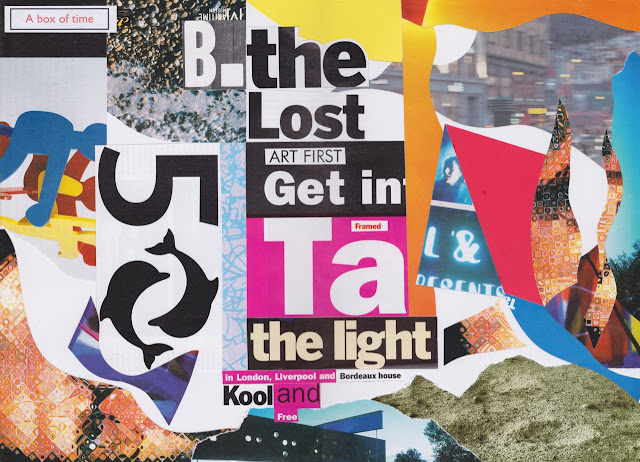 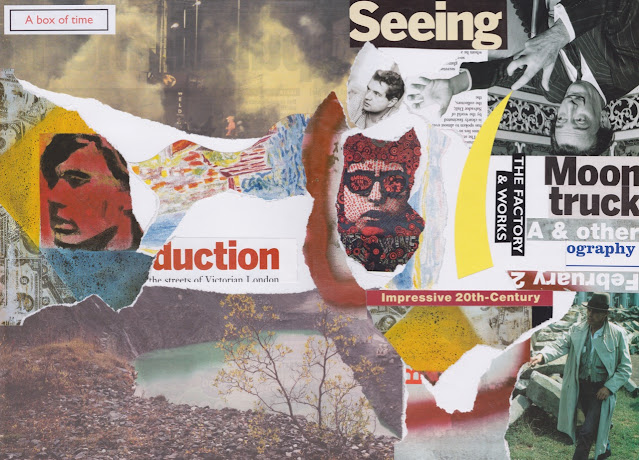 As we move into the second year of the pandemic and the third wave in Norway it becomes more urgent to think of ways to make sense of continuing to produce art under the circumstances. Where will it go? Who will see it? Does it even matter any more? As opportunities for large scale art works in public venues are scarce, other strategies are necessary. Online distribution for example, but how effective or satisfactory is that really? I remember the days of net.art in the mid nineties. A revolution of sorts, then just like the dot.com boom, it was over.

Norway had engaged with notions of online art at a national level. I was one of a number of artists who received commissions to make net-based art projects, accessible through a national portal. At some point the server got switched off. These projects might just as well never have existed.

Most artists, of necessity, have some kind of personal web site or blog. But how often does anyone look at these - including this one? We are constantly bombarded with links to innumerable sources of information, every day we click our way through page after page, but apart from certain things, like the front page of a newspaper we regularly read, how often do we actually return to a page or a site we have previously visited?

Adding new information or updating becomes more an act of archiving, and less one of publishing. But in a time of limited options it is at least something that can be done. Perhaps in the future, post pandemic, there will be a massive campaign to get our art offline and out into the world, in physical spaces, to be approached by the physical bodies of a public. I'd like to see our cities and towns after Covid as huge "salon" exhibitions - uncurated, democratic, just a celebration of what artists have managed to do despite the circumstances!

In the meantime, some screenshots from an ongoing photo enterprise that could be in print, but for now exists only digitally. Walking, observing and documenting is something that can be done, with minimal resources. Some of the images are shared online in Facebook groups including Edgelands and similar. Sharing in that way is at least a form of visual communication within a quite tolerant milieu.

Things have been quiet here for some months, but now it is time for some updating. Although Covid restrictions continue, not everything has stopped, and in fact there has been quite a lot of activity. The exhibition Ta Deg Tid / Take Your Time, in which Michael Duch and myself showed our film Mind Is Moving IV, continued until the end of January. The music, composed by Michael Pisaro, has been recorded inside Nidarosdomen (Trondheim Cathedral) and Michael will release it on cd this spring. That will provide the opportunity to do more with the film and possibly a live performance with projections.

At the end of January a new exhibition opened at Kunstgarasjen, Bergen with works by gallery members. In that show I am presenting four digital prints from the series "I hvert øyeblikk / At Any Given Moment",  parts of which have previously been exhibited at Surnadal Kulturhus (Vårsøg utstilling 2019), at TEKS in Trondheim, along with the video installation The Atmospherics 9, and earlier at MacQuarie University Gallery in Sydney, where several of the prints are also in their collection. 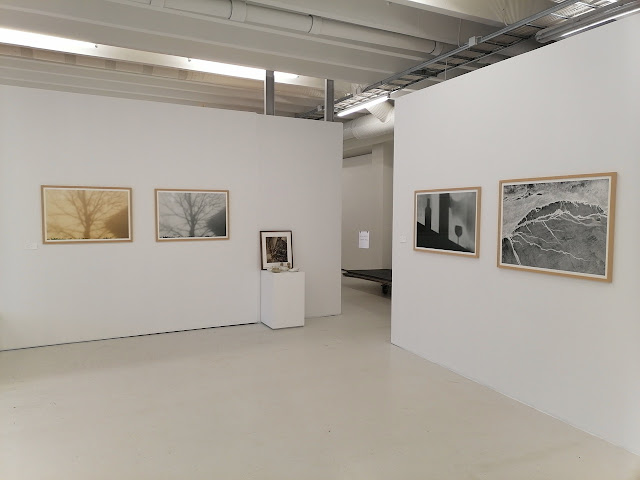 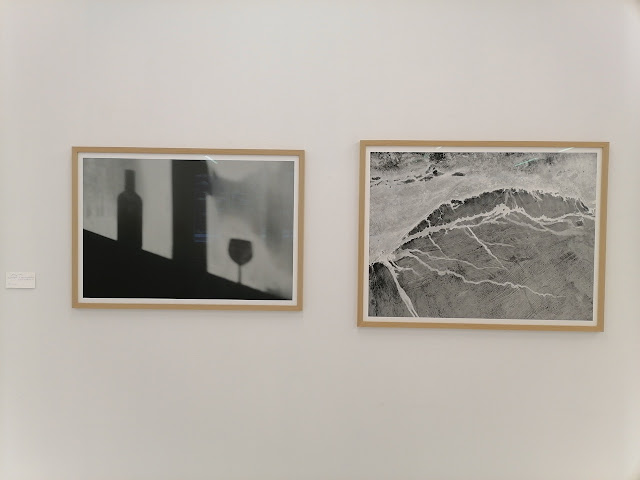 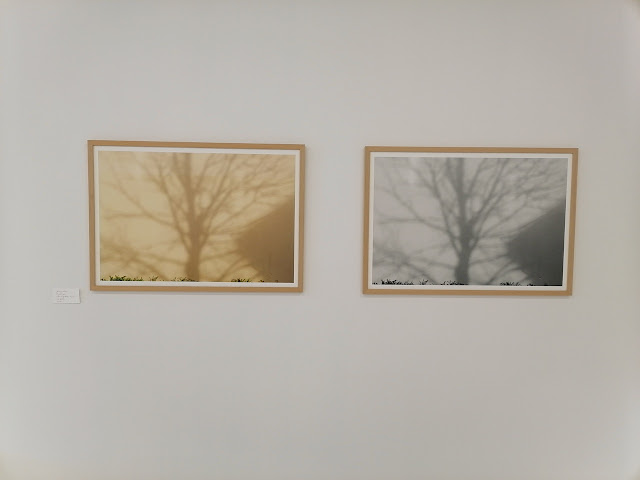 The newest work in The Atmospherics series, together with Trond Lossius, was completed in autumn 2020, initially for inclusion in an online presentation of the archives of BEK (Bergen Center for Electronic Art). There it is streamed within "Å Video" a selection curated and commented by Anne Marthe Dyvi. The video is now also streaming from a showcase in my own Vimeo account and is ready to be "exported" for screenings and exhibitions offline.  The Atmospherics 11 (remake/remodel) is a single screen video work with stereo sound, mastered in 4K video and available for screening in 4K or HD. It is an unusual work in the context of the whole series, which has mainly comprised multi channel installations for gallery and museum spaces. It is a 40 minute piece, made from material that has featured in the installations Atmospherics 1 - 9.

Trond Lossius and myself, together with Craig Wells, will be doing a series of audiovisual performances during the course of 2021 at different venues within Vestlands Fylke (The province of Western Norway). Dates and venues are yet to be confirmed. The events will feature field recordings, live music and projections.

Other news is that I am one of the two curators for a series of events at Surnadal Billag arts centre in Møre og Romsdal running from April through late September. Events I am programming will be happening over the whole period, whilst Fabia Bürger will be curating a compact and intense programme in June, with artists from Norway and Germany.

The first event in the series will be an exhibition at Surnadal Billag in April by Kwestan Bawan Jamal (Iraq/Norway) and Carl Martin Hansen ( Denmark/Norway). Later in the season there will be a collaborative project by Trond Lossius and Ingeborg Annie Lindahl, and then an all-star sound art and multimedia event with artists including Michael Duch, Øyvind Brandtsegg, Alex Murray Leslie (Chicks on Speed) and Magdalena Manderlova. In late September in collaboration with Surnadal Kulturhus we will stage a one-day mini film festival in the cinema, alongside a video installation by Hasan Daragmeh in the adjoining gallery. Full details of the entire 2021 programme will be posted on the Surnadal Billag website in early April.

During a few days working in Surnadal, I used the opportunity to test project some new video works in the large project room at Surnadal Billag. The Atmospherics 11 (remake/remodel) is the latest collaborative work with Trond Lossius, and is a remix of materials used in the project that has been ongoing since 2014. The Atmospherics 12 is a work in progress, a four channel 4K video installation intended for installation with four projections and multi channel surround sound. Also tested was one of the videos from Take Me To The River, the recent exhibition with Jon Arne Mogstad, previously only shown on a monitor, but also suited to large scale projection. 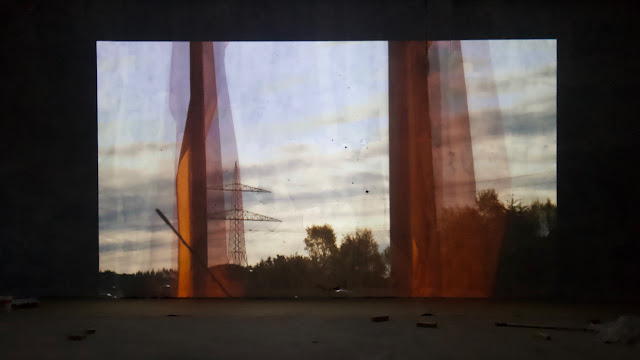 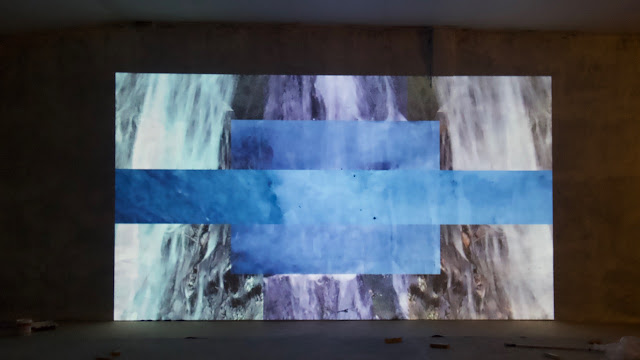 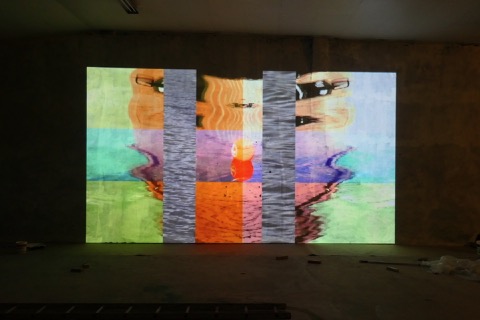 JW
Bergen, Norway
Artist and former professor of Fine Art at NTNU, The Norwegian University of Science and Technology, Faculty of Architecture and Fine Art. Former professor and MA course leader at KHiB, Bergen Academy of Art and Design.